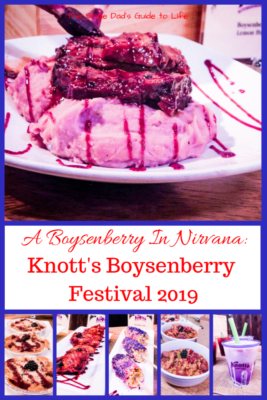 Every year come spring we travel down California State Route 39 to see Buena Park, taste boysenberries, and experience bountiful bouquets of beverages meant to delight the senses called Knott’s Boysenberry Festival.  What is Knott’s Boysenberry Festival?  Why celebrate the boysenberry?  Check out this post, about how a certain Berry Farmer from Pomona who turned his berry stand into a huge business of world import.  You can see why Walter Knott is one of my heroes here.  As for the Boysenberry, it was one of Walter Knott’s miracles, able to turn a hybrid berry which seemed to be failing into a berry of great renown.   And beginning on March 29th through April 28th of 2019, we celebrate this delicious berry created by the man whose previous failures inspired him to be the biggest berry man in the world at Knott’s Boysenberry Festival 2019.

With all this in mind, five years ago Knott’s Berry Farm inaugurated some great boysenberry tastings at the park with a card and different tastings throughout Ghost Town.  It was so successful, they brought it back the next year and added amazing shows, beer and wine tastings, other fun boysenberry merchandise, and a whole lot more, beginning the first annual Boysenberry Festival in 2015.  Knott’s created boysenberry heaven here on earth.  (I remember lathering my pancakes in Boysenberry Syrup as a child.  It was truly heaven on a pancake.)

So when they began the boysenberry festival a few years ago, I knew I wanted to take my daughter to it, experiencing some different cuisine flavors.  As a parent, sometimes it’s difficult to get your child to try out new things.  But throw in a few shows and fun festivals and you can get your child to try out anything.  (Ok, maybe not the gator but I hope to get her to try it out someday.  It tastes just like chicken.)

I remember getting my first tasting cards at the Boysenberry Festival with my daughter.  It was a really inexpensive $25 per card and I figured we could both taste a little of what was there.  Little did I know how ridiculous that would be.  I saw them cooking up hot dogs, figuring we would get a small one with boysenberry ketchup, mustard, and relish.  A footlong each later, I knew we would never get through the cards.  I never regretted trying though.  My daughter loved it, and tried out almost everything, which for her was quite an accomplishment.

As for this year, we were happy Knott’s Berry Farm invited us back to try out some of the delicious tastes they created this year for the festival.  It was a night of adventurous food pairings and delicious boysenberry items to be had by all.  With all the boysenberry deliciousness to be had, we return this year with another top ten list of Boysenberry Delights at the festival. Some old classics, some new favorites, and some bold choices exist in this year’s top ten of the Boysenberry Festival.  So, welcome to the new delicious dishes of the season as the Single Dad’s Guide proudly presents to you The Top Ten Boysenberry Dishes at Knott’s Boysenberry Festival 2019.

Kicking off the top ten with some delicious chicken wings, you can never go wrong with some delicious wings and boysenberry BBQ sauce.  I love the sauces because it’s a bit spicy, a bit sweet, and always delicious.  And to go with these new Jerk Chicken wings?  Delicious!  Check them out at Spur’s Chophouse Outdoor Stand during Knott’s Boysenberry Festival.

9) Boysenberry Sausage In A Bun

Brought back from last year, the Boysenberry Sausage is so delicious it needs no introduction.  And it stands on its own quite well.  No accouterments needed.  If, on the other hand, you love your boysenberry, adding some delicious boysenberry ketchup, boysenberry mustard, and a bit of boysenberry relish never hurts.  (I prefer mustard.) Served at Wilderness Dance Hall during Knott’s Boysenberry Festival.

Very tasty when compared with some other great dishes here.  I love the baked Mac and Cheese.  And the Habanero gives it just the right amount of kick.  I was worried given the pepper used it might be a bit too spicy, but really it wasn’t.  The spice was perfect.  No worse than the BBQ sauce and all delicious.  The little kick up of boysenberry to the mix doesn’t hurt either.  To be found at Wagon Wheel Pizza during Knott’s Boysenberry Festival.

My favorite returning drink from last year.  I remember when I saw the Boba and my jaw dropped at how delicious it was.  I didn’t know what Knott’s would do with a Boba.  While I’m not a Boba snob, I am a bit picky with my Boba and this was perfect.  A great mix of refreshment and taste.  What more could you ask for?  It’s at the Gourmet Coffee Hut during Knott’s Boysenberry Festival.

If you want the perfect pairing to the previous drink, you will not go wrong with the Boysenberry Key Lime Tart.  It’s 100 percent delicious.  And it just melts in your mouth with the creamy goodness.  Wasn’t sure what I would think of lime and boysenberry mixed together, but it totally works here.  Found also at the Gourmet Coffee Hut during Knott’s Boysenberry Festival.

I do love me some delicious skewers, and of the two new ones they added this year, it was my favorite.  The Chicken cooked up perfectly.  Good enough to melt in your mouth.  And the Boysenberry Aioli added just the right amount of sweetness to this practically perfect dish.  You will definitely want to use it as one of your card tastings.   Found at the Wilderness Dance Hall during Knott’s Boysenberry Festival.

If you want to look at something which will just make your mouth water while staring at it, this dish will do the trick.  Some delicious mashed potatoes with a hint of sweetness from the Boysenberry and over the top and amazing Boysenberry Pot Roast which will just melt in your mouth. So, if you want a sweet and savory pair with creamy goodness, you cannot go wrong here.   It’s found inside Spur’s Chophouse during Knott’s Boysenberry Festival.

Back for round two this year, you will want to get yourself a bit of the Boysenberry Elote from last year.  Boysenberry mayo, boysenberry butter, and slathered in some delicious parmesan and you will want to reacquaint yourself with this delicious returning item from last year. Most noteworthy, every single person agreed with me it was love at first bite.  So get yourself a bite this year if you missed it last year.  I know the rest of us will be going back for round two.  Or maybe round three.  It’s just outside the Ghost Town Bank during Knott’s Boysenberry Festival.

It was really hard picking between the top two.  To be honest, it could have been a tie; but, this delicious boysenberry pulled pork tostada will just melt in your mouth.  It was a delicious taste of creamy goodness with some amazing savory bites.  It’s pure boysenberry heaven in a bite.  Yummy!  Found at Wagon Wheel Pizza during Knott’s Boysenberry Festival.

1) Boysenberry Jambalaya With Chicken And Sausage

As much as I am a Boba connoisseur, I am an even bigger Jambalaya snob.  I make my own Jambalaya at home and am rarely impressed by what they do even in the big restaurants.  It’s so tricky the taste they have to get right.  But Knott’s does it as well as anyone with this Jambalaya with Chicken and Sausage.  I will have to go back for a few helpings of this.  It’s just amazing goodness in a bowl.  Found at Wagon Wheel Pizza during Knott’s Boysenberry Festival.

Honestly, I could probably have picked a top twenty of this list and still not run out of items to toe for.  It’s like selection Sunday for March Madness and you get to the end and agonize over the teams you choose.  When you are talking about delicious food, Knott’s does it right here and they get it right year after year.  I agonized over my selections.  In addition to the top ten, there is a Waffle with Maple Boysenberry Cream Cheese Syrup, Boysenberry Shawarma, some delicious grilled salmon for the seafood lover, and the Berry Beast at Ghost Town Grill you will need almost four people to get through.

Whatever you do, you will probably need to come on a few days if you really want the full foodie experience Knott’s provides here.  I know I will be going back a lot. (Plus Yogurtland got together with Knott’s Berry Farm to add some delicious boysenberry themed froyo for you to try out as well. Mmmmm!!!!)

When it comes to food festivals in general, and Knott’s Berry Farm in particular, you cannot do better than the Boysenberry Festival they have year after year.  One food tasting card will cost you $35 for 8 choices of 14 different options they have at the park.  To get a Wine / Craft Brew card is only an additional $30.  And with their inexpensive annual passes, you will want to make sure you come back for a couple of days. In addition, an annual pass is such an inexpensive way to enjoy the whole festival and be able to enjoy the rest of the amazing things happening at Knott’s this summer and throughout the rest of the year.  Get yourself an annual pass here: Annual Pass.

So what of these top ten dishes at Knott’s Boysenberry Festival 2019 would you try out first?  Which dish sounds the most delicious to you?  What is the best food festival you attended?  What made it so fun?  And what possible dishes do you think Knott’s should add to future boysenberry festival treats?

If you liked this Knott’s Boysenberry Festival post, click the like button at the end, and/or leave us a comment letting us know what you found most interesting here. Furthermore, be sure to share this with your friends, especially those visiting the area and let them know all the things they will have to try out here.  And be sure to follow us here at the Guide to get the latest and greatest posts on Knott’s Berry Farm, food holiday, satire, fitness, Southern California, parenting, movie reviews, and lifestyle posts to enjoy.  We always love knowing you support us.  Thank you for stopping by.

Until next time, this is me signing off.