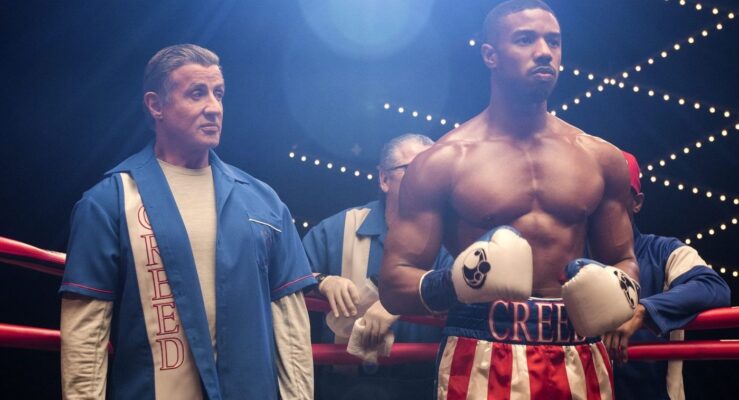 Once upon a time, in the year 1981, which seems like such a very long time ago in a land which no longer exists, there was an eight-year-old child whose parents were very protective of their children.  They were so protective, they were afraid to let them watch PG-rated movies at the movie theater.  But sometime in this magical year, they purchased a VCR.  For those of you who do not know what a VCR was, it predates the streaming services, blu-ray players and even the DVD.  (Shocking right?) With the advent of the VCR, these parents were able to more closely monitor what they would have their children watch.  It was sometime later that year these parents took their two school-aged kids to their very first video store.  And from that video store, they would select a couple of videos: Rocky I and Rocky II.

Rocky, starring Sylvester Stallone, portrayed the story of Rocky Balboa, an enforcer for a local mobster who has dreams of being something better in this world.  With limited prospects, Balboa moonlights in the local boxing ring, trying to make a name for himself.  As a run of the mill boxer, his big claim to fame is that he is never knocked out while he is the ring.  He keeps fighting no matter what the odds.  In walks Apollo Creed (Carl Weathers), looking for a new challenge and comes upon the irascible Balboa and sees the opportunity to have an easy fight with someone who might draw an audience of a different sort.  Of course, you all know the story.  Balboa fights Creed to a standstill, and in Rocky 2, Balboa gets a rematch he will eventually win.

The importance of the story of Rocky to me, apart from being one of the first movies I checked out from a video store, was the way it made me feel.  No one would accuse Sylvester Stallone of being one of the most gifted dramatic actors we have had.  But the brilliance of the movie was how Stallone marshaled both his talents and shortcomings into creating a beautifully sympathetic character.  And what’s even more amazing, Stallone himself wrote the screenplay.  He was a regular Damon and Affleck only years earlier.  Understanding his gifts better than anyone, Stallone created a character well suited to himself.

But beyond the well-crafted screenplay, there is something about which Rocky does which few other films accomplish.  Rocky makes you stand up and cheer for the hero, feeling both his pain and his triumphs.  It’s one thing to sympathize for the hero.  It’s quite another when you want to get up and cheer on him during the fights.  When a film has impacted you enough to make you want to stand up and cheer for the hero, or jump up and down with every triumph, you know it transcends the typical film for you.  Or if at a boxing film you find yourself bobbing and weaving through every punch, you know, whatever a film was trying to do, it worked.

And this is all background to the series of the films which would be known as Rocky Balboa series.  Which leads us to the present film in the series: Creed II.  But of course, there are a couple of other things which are important to know before you reach this film in the Rocky series, especially if you want to be up to date.  After Rocky’s rematch in Rocky II, he ends up having to defend his title against a crazy boxer Clubber Lang (Mr. T).

He loses the first fight and his coach at the same time.  Then Apollo Creed returns to encourage Rocky to get back into shape and rounds him back into form because he had lost some of the edge he’d had in the first place.  Creed especially recognizes this as he fell into the same trap himself when he was on top.  He lost that edge.  Creed brings it back to Rocky as his coach.

In Rocky IV, Apollo feels like his time as a boxer is coming to an end.  But his pride prevents him from quitting without going out with a bang.  So he finds a think he thinks is a good fight, taking on a powerful Russian Boxer by the name of Ivan Drago (Dolph Lundgren), who then proceeds to demolish Creed in the ring.  But it goes beyond the demolishing.  When Rocky wants to throw in the towel, his friend Creed won’t let him costing Creed his life in the process.

Fast Forward through a couple more Rocky movies, and a transition into the next Rocky movie called Creed.  This transitions the story from being primarily about the boxer Rocky Balboa, into a picture about the son of the rival who started all with the son of Apollo Creed.  Michael B. Jordan picked up the mantle as he plays Adonis Creed, Apollo Creed’s son.  Despite being the illegitimate son of Apollo Creed, he is raised by the actual wife of Apollo, being taken out of an institution in LA.

After several years and the objections of his adopted parent he decides he wants to go off to LA to become a boxer, getting tutelage under the son of his dad’s old boxing coach.  But after being rejected by him, he instead takes off to Philadelphia to convince Rocky to take him under his wing.  Despite reservations, Rocky eventually helps Creed make a name for himself until he gets a final fight which ends much like Rocky I.

The film begins with Creed, after a string of victories in the ring following his defeat, finally winning the World Heavyweight Championship over Danny “Stuntman” Wheeler.  Finally when Adonis gets to feel like he is at the top of the boxing world, with a lovely girlfriend Bianca Taylor (Tessa Thompson), and supportive manager Rocky Balboa.  He even is ready to pop the question to his girlfriend, wanting to cement the beautiful things in his life.  But, of course, this is a movie and conflict is inevitable.

Boxing promoter Buddy Marcelle (Russell Hornsby) knows a good story when he sees it.  He finds Viktor Drago (Florian Munteanu) with his dad as a coach, fighting bouts in the heart of Russia.  And he can see the talent involved in this strongman with the genes of his father.  In addition, Viktor seems to be trained in the hatred of his father who lost everything because of his one loss to Rocky Balboa so many years prior.  Marcelle brings the opportunity to Adonis.  Adonis does not want to take on the challenge at first.  But after being goaded for a while, Adonis feels like he needs to do this to defend the legacy of his father.

Rocky refuses to train Adonis for this match as he feels like it is a bad match, and he has too many bad memories about what happened to his father.  Adonis gets his dad’s former trainer who rejected him in the first movie to train him instead.  As per general story arc, Adonis wins the first bout with Drago but only because of Drago violating boxing rules, punching Adonis when he was down.  This cost him the bout on a technicality as he was pummeling Creed from the get-go.  While this may have kept him his belt, he was severely injured, and he lost some cache among his fans.

He gets away from the world for a while, unsure about what to do with the rest of his life.  He isn’t even sure he wants to box again.  And he knows if he boxes again he will have to do it against Drago because anyone else and the fans would know he was ducking an opponent.  This time Rocky agrees to help him in his training, and he finds a new reason for taking on Drago which is more about his own internal value and finding what makes him his own man.  Boxing defines Apollo so he needs to get back into the ring.

I won’t spoil the ending, but I am guessing you can guess what happens from here on out if you have seen any of the Rocky movies, especially Rocky IV.  Lots of training followed up by a boxing bout and a winner . . . and loser.  And a lot of being beaten to a pulp in the meantime.  The real question is . . . does this qualify as a good Rocky movie? Bad Rocky movie?  Somewhat indifferent Rocky Movie?

I would have to say that as far as movies go, Rocky has a very set formula.  This can be incredibly limiting.  But it also can be incredibly effective.  Sometimes both.  As far as Creed II goes, it follows the formula quite well.  It was so effective when it came down to the fight, I could be seen bobbing and weaving in my seat trying to avoid the punches of Viktor Drago.  I really did love the boxing portions, which were followed up by effective enough training scenes and mild forms of drama.

If I were to critique anything in the film, I would say the dialog was a bit weak.  Maybe it’s because this is the sequel of a reboot of a series with 6 films before we even arrived at Creed I.  (Which makes Creed II essentially Rocky 8.  It boggles the mind.) The problem, as I have already stated, comes from the limitations of trying to follow a formula.  It’s formula on top of formula here.  So the drama ends up feeling slightly contrived instead of natural.  It can be difficult in any series, but truly difficult in one which has gone on for so long.

Nevertheless, I would have to say I quite enjoyed the movie.  And it’s definitely worth going out there for a watch.  If you are a Rocky fan at all, it’s a must see.  And even if you aren’t a Rocky fan or are brand new to the whole series, it’s worth a watch.  So give it a go.

Rocky has been such an indelible part of my life for such a long time.  It truly is one of those movie series I keep coming back to, no matter how often I have watched them, or what I even thought about the previous movie.  I know it won’t be around forever.  Stallone has definitely aged and will not be with us for that much longer.  But he has littered the landscape with interesting characters, none more so than the man with the American Boxing Shorts: Rocky Balboa.  While not the most gifted dramatic actors of his time, Stallone has preserved a sports movie legacy few can match.  And I am grateful for his contributions to it.

If you liked this post, it’s always good to know that and clicking the star will do a good deal towards letting me know.  And definitely, share it with your friends.  Be sure to follow us here to keep you in the loop on all things movie review, parenting, fake news, food history, fitness, Knott’s Berry Farm, Southern California, and lifestyle blogs.  As always, thank you for stopping by.

Until next time, this is me signing off.